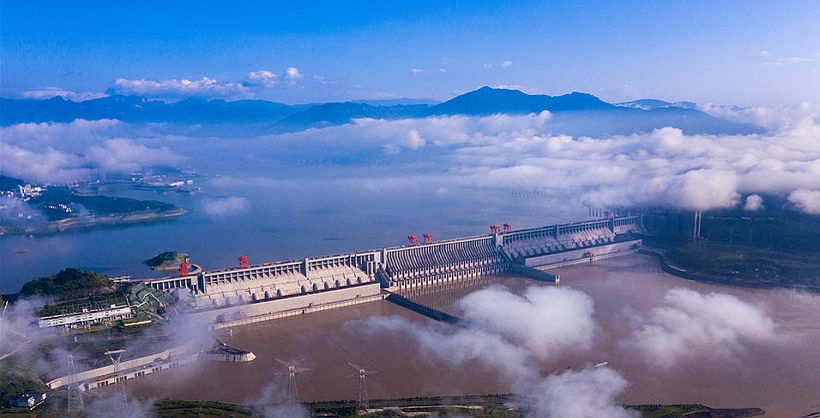 China’s State-owned Assets Supervision and Administration Commission of the State Council advised that in 2020, the Three Gorges project had produced 103.1 billion kWh of clean power, setting a world record for annual power output by a single hydropower plant.
The amount of power equals that produced by burning 31.71 million tons of standard coal, eliminating 86.71 million tons of carbon dioxide, 20,600 tons of sulfur dioxide and 19,600 tons of oxynitride, giving the project a key role in building a clean, low-carbon, safe and highly-efficient energy system and promoting China’s ecological civilization construction.
Meanwhile, the project helps boost the country’s social and economic development as well as the high-quality development of the Yangtze River Delta region.
In 2018, the upper reaches of the Yangtze River received a large amount of rainfall. The company managing the dam was able to recycle small and medium-sized floods by promoting forecast capacity on water and rain conditions, analyzing the coming water volume, and enhancing scheduling ability.
The Three Gorges Dam is a hydroelectric gravity dam that spans the Yangtze River by the town of Sandouping, in Yiling District, Yichang, Hubei province, central China, downstream of the Three Gorges. The Three Gorges Dam has been the world’s largest power station in terms of installed capacity (22,500 MW) since 2012. The dam generates an average 95±20 TWh of electricity per year, depending on annual amount of precipitation in the river basin
In 2012, the Three Gorges Dam took over the number one spot of the largest hydroelectric dam (in electricity production), replacing the Itaipú hydroelectric power plant in Brazil and Paraguay.
The height of Three Gorges is about 594 feet (181 meters (m) and the length is about 7,770 feet (2, 335 m). The dam creates the Three Gorges Reservoir, which has a surface area of about 400 square miles (1,045 square kilometers) and extends upstream from the dam about 370 miles (600 kilometers).
(Source: China’s State-owned Assets Supervision and Administration Commission of the State Council/China Daily/Wikipedia/USGS – Image: Three Gorges Dam on the Yangtze River)