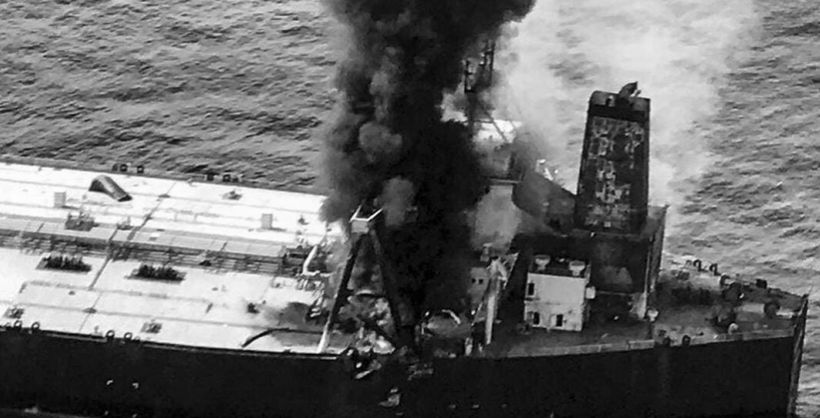 The fully laden very large crude carrier (VLCC) New Diamond carrying about around 270,000 tons of Kuwaiti oil was bound for the port of Paradip located on the eastern coast of India when a fire broke out in the engine room.
The tanker issued a distress call at about 40 miles south of Sri Lanka.
A Filipino sailor died when an explosion occurred in the engine room.
19 sailors were rescued by the commercial vessel Helen M, two by the Sri Lanka Navy ship Sayura, and one by the Navy ship Ranarisi, which landed a rescue party aboard New Diamond. 22 crew members were rescued and one person who sustained burn injuries was admitted to the Kalmunai Hospital. A total of four Sri Lankan ships responded to the incident, as well as a surveillance aircraft of the Sri Lanka Army. International responders included an Indian Coast Guard ship and three Indian Navy vessels, and two Russian Navy ships that were in Sri Lanka for scheduled exercises at the time. In addition, a MI-17 helicopter which is owned by the Sri Lanka Air Force was also deployed in the search operation.
Part of the tanker structure was damaged due to the intense heat from the diesel tanks as the fire spread from the engine room but did not spread to the oil cargo.
The ship was built as Ikomasan by Mitsui Engineering & Shipbuilding in Chiba, Japan. Its keel was laid on 14 December 1999, it was launched on 10 August 2000, and was delivered on 29 November 2000. It was later on renamed New Diamond. Current owner is the Greek company Porto Emporios Shipping Inc.
The Sri Lankan navy in charge of coordinating the relief efforts indicated that the risk of an extension of the fire was ruled out but that the level of surveillance had to remains high.
The 5 September, Indian Coast Guards said that the New Diamond has been towed from Sri Lanka coast to safe waters successfully.
The Maldives, located a thousand kilometers southwest of Sri Lanka, have worried about a possible oil spill from the tanker, fearing serious consequences for their environment.
(Source: Ouest France/Wikipedia/India Coast Guards/Image: Sri Lanka Air Force)